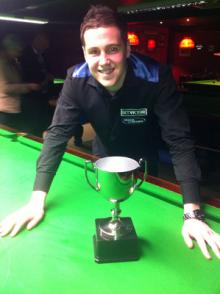 Gareth Allen (Ewloe) won his first Welsh ranking tournament when he beat Jamie Clarke (Llanelli) by three frames to one in the final of the 2013 European Championship qualifier at the Penarth Road Snooker Centre, Cardiff.

His quarter final match with John Bevan (Newport) was one of the best matches of the season. Only taking an hour it was terrific stuff from start to finish.

Allen took the first frame with a fine break of 87. Bevan opened the second with a run of 49 but Allen responded with a clearance of 67. A fabulous effort of 102 in the third reduced Bevan’s arrears but it was not enough to put off his opponent who finished off a great match with 52 in the fourth.

The other three quarter finals all went to the deciding frame.

Gareth Allen and Duane Jones will represent Wales at the 2013 European Championships in Poland next month.