Despite not having much time to arrange this event this year the popular coaching foundation tournament went off very well at Brackla snooker club in Bridgend.

This venue has not been used for several years now but they will be back on the W.B.S.A. calendar for several events this season. Players, officials and club management were pleased with how the day went. 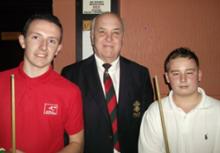 Barry’s Sam Thomas (who will be making his international debut for Wales Under 19's next week) was in excellent form all day and deserved his win although he was given a fright by the ever improving Lewis Samuel in a close final. Some superb pots from Sam in the deciding frame being just enough to get him over the line to join an illustrious group of players who have won this event in the past, including current Welsh champion Duane Jones and internationals Kristian Phelps, Anthony Krysa (twice) Jamie Clark, Jordan and Kyle Stiens and last years winner Tom Rees.

Some of the youngsters in this year’s tournament are sure to go on to achieve similar success in Welsh snooker. Nathan Camillini (8 years old) showed promise as did several others including  Callum Matthews, Callum Richards and Jackson Page.

The plate competition was on by Jordan Bowd who beat Zack Jones 2-0 in the final.