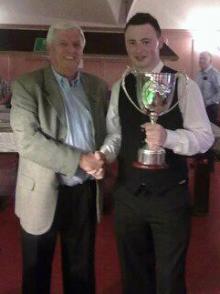 Nineteen years old Duane Jones from Mountain Ash proved himself the best amateur snooker player in Wales when he defeated Pwllheli’s Elfed Evans in the final of the 2012 Welsh Championship.

Conditions were perfect at Merthyr Labour Club and Evans, winner of the event in 1994, took control of the early part of the match with breaks of 43, 53 and 61 in the first three frames.

Jones hit back with a superb 89 clearance in frame four and runs of 43 and 77 in the fifth reduced his arrears to a single frame.

Evans responded with 66 to win the sixth and Jones won a close seventh to make it four three to Evans at the interval.

The match was evenly poised starting the second session but what was to follow highlights how Duane deserves an opportunity to compete with the professionals on the Main Tour.

With breaks of 57, 44, 71, 66 and a 61 clearance in the last frame Jones was unstoppable and ran out a convincing winner by eight frames to four.

Duane will compete in the World under 21s in China later this month and then travels to Egypt for the World Amateur Championships in November. Elfed will play in the Masters(over 40s) event there.