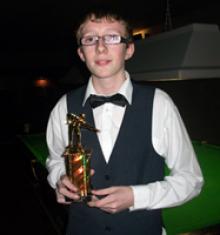 McCauley Cole (Caerphilly) won this event in fine style, dropping only one frame throughout the tournament. After playing for only two years this was McCauley's first ranking event success. A thoroughly deserved result for a young lad who works so hard at his game.

Ryan had travelled back from Pontins in Prestatyn to play in this event and the long journey was probably the reason he seemed to ru nout of steam after disposing of No.1 seed Travis Furnish in their quarter final.

Rhydian Stringer won his second successive plate competition, but only after a very close encounter which ended 2-1 against thevery promising 10 year old Alfie Davies. Alfie showed some tremendous touches all day and will undoubtedly be one to watch once he gains a little more experience.

With only one event left at under 16s level, the race for Welsh team places is still wide open. The Welsh Under 16's Championship in Rileys Fforestfach on March 27th should be very interesting.

Points and a half are available in this final event and that could have a baring on who qualifies for a top six spot and a place in the Welsh Team for the Celtic Challenge in Ireland and the Home International Championships.