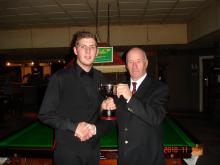 Beaten finalist again Krysa made breaks of 66, 71 and a clearance of 109 in his semi-final against Darren Thompson but was no match for Wells this time.

Simon Morgan (Swansea) had his best tournament to date when he reached the semi-final, coming from two nil down to beat up and coming young cueist Kishan Hirani (Cardiff) three frames to two.