Sunday the 25th January saw the finals of the Welsh Mens Event 4 "Jack Carney Memorial" played out at The Matchroom, Llanelli. The results were as follows: -

PRELIM.
Mark Stoneman / Jamie Clarke.
J. Clarke took the first two frames which included a 42 break. Mark responded in the third with a 48 break to win frame three at 2-1 down. Jamie upped his game to win frame four to secure the match 3-1.

Second 1/4 Final.
Tom Rees / Alex Taubman.
Another tight match, this was nip and tuck throughout. When at 2 frames each went to a decider. With a break of 58 Alex Taubman had done enough to win at 3-2.

Third 1/4 Final.
Jamie Clarke / Rhydian Richards.
Jamie took the first two frames with breaks of 69 and 75. Rhydian responded to take frame three. After a bout of safety play, Jamie managed a break of 37 which was enough to win the match 3-1.

Fourth 1/4 Final.
Ben Jones / Duane Jones.
This was a very scrappy match, both players missing pots, being unable to settle down. Duane managed to win 3-1 with the fourth frame going to a black ball finish.

First Semi Final.
Gareth Allen / Alex Taubman.
Alex took the first frame, but Gareth replied in the second at 1-1. Gareth then went ahead with a 48 break to take frame three. Alex came back in the fourth clearing from the Brown to win on the black, going into a decider. Gareth secured the match with another  48 break to take him to the final.

Second Semi Final.
Jamie Clarke / Duane Jones.
The bar was raised in this match. Jamie with a break of 48 wasn't enough to win the first frame and Duane hit back to take the frame on the colours. Duane upped his game with a 75 clearance and 81 resulted a 3-0 win for Duane, taking him to the final.

FINAL.
Gareth Allen / Duane Jones.
Duane and Gareth showed great respect to each other. Both players playing some good safety. Duane edged ahead to win frame one. Frame two gathered momentum, with a nice break of 80 from Gareth to draw level at 1-1. Frame three was a safety first affair until arriving on the colours. They seemed to share the colours up to the black. Both needing black to win the frame. After several attempts, it went to Duane  moving ahead 2-1. Duane upped his performance in the fourth, with a break of 64 was enough to clinch the match 3-1 and take the £50 prize money and the Jack Carney Memorial Trophy. 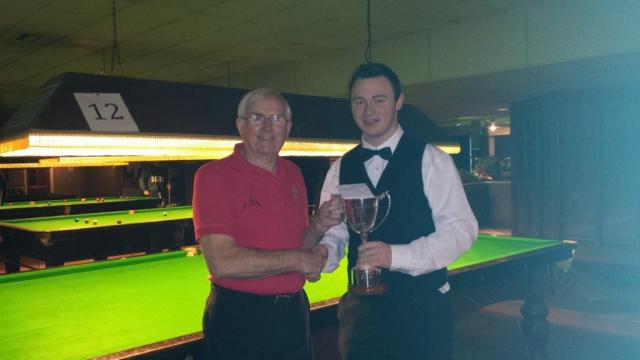