Prices wins his second Welsh title on the bounce 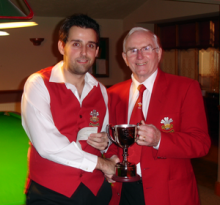 Marcel Price won consecutive WBSA ranking events when he defeated the ever consistent Gareth Allen in the final of the European qualifier.

Price beat Richard King and Duane Jones to reach the final while Allen narrowly beat Callum Lloyd before easing past Stephen Ellis to get there.

Top ranked player Jones and Price will represent Wales at the 2012 EBSA European Championship in Latvia this June.