Welsh Under 21s Event One

The U21 tournament class got underway on the 18th October with a strong field of 20 young players.

The draw threw together some testing matches in the early rounds with some notable players going out early. Aaron Burgess, Tyler Rees and Joshua White all falling before the Quarter Finals. Conor Caniff continued his improvement with a first career win over Jackson Page, but could not sustain his form, falling to Rhys Thomas in the Semi Final.

Callum Lloyd coasted through the top half of the draw, as did Rhys Thomas in the bottom half. The Final was a high standard with both players scoring 30 plus breaks in every frame. Callum took the first 2 frames before Rhys showed hi resiliance by coming back to level the match at 2 - 2 despite Callum having a 50 break in frame 4. Callum showed his quality in the decider with a superb 78 break to see him over the winning line.

The rankings have been updated to reflect the results and can be found here.

Pictured below is Callum with the trophy for the event. 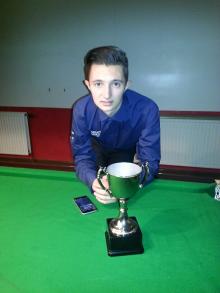