Welsh Under 14s Event One - Results

The opening Under 14s event was contested by a small field of 12 youngsters, down at Redz snooker club in Cwmbran.

The promising Luke James put out no.1 seed Liam Davies before losing to Ryan Bowgen in a very close semi final. The other semi was also close with Jacob Boyle giving no. 2 seed Rhys Morgan a scare before going down 2-1.

The final seemed to be going all Morgan's way as he raced into a 2-0 lead before Bowgen, showing tremendous grit and determination levelled at 2-2. Morgan however held himself together very well to win the decider.

The “plate event” was won by Liam Davies who defeated newcomer Ben Massey 2-0 in the final. Both players played out a good final

It was encouraging to see a strong performances from all the players on the day, new and old faces alike.

Rhys is pictured below with the trophy for his days work 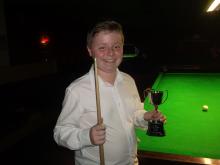