Tyler Rees (Llanelli) is the winner of the inaugural EBSA European Under 18s Championship held in Wroclaw Poland this week.

In the final against fellow Welshman Jackson Page he raced into a 4-0 lead hardly missing a pot before Jackson recovered his touch and won the next two frames.

Tyler won a scrappy seventh frame to lift the title which is the icing on the cake at the end of a very successful week for Welsh junior snooker.

Below are some photos from the day. 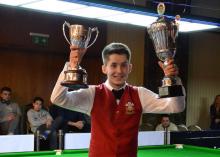