Due to other competitions and committments, the match was played out over two evening sessions of 7 and 8 frames. In the first session, the frames were all taken against the break off, with the players trading blows one for one. First player to compile a 50+ break was David, with a 54 in the third frame. True to form Darren struck back immediately with a 64 in the next frame. By the end of the session, David was 4-3 up.

The second session opened with a tight eighth frame, David taking the first of the evening to go two frames clear for the first time. Darren then ran in a 68, winning frame nine by 81-0, only for Dai to counter with a 64 to take the tenth to nil. The eleventh frame could have been hugely memorable for those that came to watch as Darren pulled out some stunning positional shots to take blacks with his first nine reds. He missed the tenth black on 73 as he forced it to create the angle to keep his hopes of a maximum alive, which would have been quite a way to go into the mid-session interval.

The final 4 frames kicked off with each player taking one close frame each. Darren levelled the match at seven all with a fine 71 break. So, it all came down to the fifteenth frame. Dai took an early opportunity to open up a 34 point lead, before getting in and clearing the table with a round 100, taking the frame and the title in fine style. Congratulations David on your second title and of course commiserations Darren who fought back like a true champion. Both players contributed equally to a marvellous final, a real treat for those that packed the room at the Labour Club.

Below are photos of David and Darren receiving their trophies from Chairman Bob Watkins. 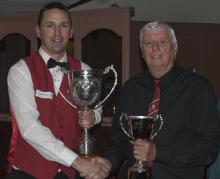 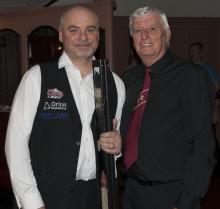