Under 18s Event One - Results

The Under 18s met up at the TG Matchroom in Llanelli at the weekend.

The opening match between Liam Davies and Bradley Ferguson was very close throughout, Bradley managing to secure the final frame at 3-2, making his long trip from North Wales very much worthwhile. Alfie Davies showed better form on the day to a win against Josh White 3-1, whereas local lad Rhys Morgan didn't find his form to go out 3 - 0 against Aaron Burgess.

The event started to really come alive in the first 1/4 final, when U/18 Champion Jackson Page  met North Wales player Bradley Ferguson, Jackson came out with a 3-0 win, riding high on his recent run of success.

The second 1/4 final saw Alfie Davies play seeded player Connor Caniff. This was another match going to the wire with Alfie coming out the 3-2 winner.

The Third 1/4 final saw an easy run through to the semis for an on form Dylan Emery hitting breaks of 39-33-52 to run out with an easy win against young Jacob Boyle.

Fourth 1/4 was between number two seed Tyler Rees and in-form Aaron Burgess. Tyler was favourite to win this one but Aaron raised his game to run out a winner at 3-1.

The first semi final was Alfie verses number one seed Jackson. Jackson showing his superior play with a break of 51 ran out  a 3-0 winner  to head for the Final.

The second semi was a fine display of break building by Dylan against Aaron with a 43 and a 55 was too much for Aaron and went out 3-0 to Dylan.

The Final was expected to be an exciting conclusion to an entertaining day of snooker, and nobody was disappointed. The play from the two best players of the day were nothing short of outstanding.  Breaks were coming from Jackson of 69 and 51  followed by an 83 clearance from Dylan brought the match to 2-2. The final frame was close. Both players tightened up their safety play and was a nail biter going to a re-spotted black. Dylan won the toss and put Jackson to play first, a good safety was made, Dylan followed but left a possible pot, Jackson obliged to win a very entertaining match.

Jackson receives his trophy below. 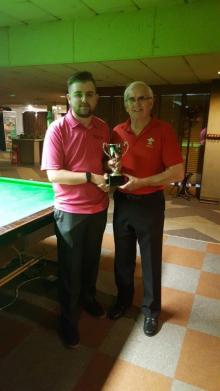