The first Mens Event of the 2016-17 season played to a conclusion today, the 2nd October, down at the Matchroon Llanelli.

The first quarter-final saw the vastly experienced Rhydian Richards draw Nathan Davenport. Nathan was in wonderful form last weekend in the qualifiers, but will no doubt be disappointed that he didn't play to the same level today, with Rhydian coming through to win 3-1.

The Second QF saw Kishan Hirani play U18 World Champion Jackson Page. This was to be an exciting match to savour, but Kishan didn't give Jackson many chances, with breaks of 58 and 35 rushed into a two nil lead. Jackson responded in the third with a 59 break of his own. The fourth frame was a bout of safety play early on until Jackson made  a error a Kishan finished off the frame with a 56 to go to the Semi's a 3-1 winner.

Third QF saw newcomer to the Welsh Ranking scene Ryan Jones who is a very creditable Pool player, drawn against North Wales International Jack Bradford.  This turned out to be a very hard fought battle going to 2 frames a piece. The final frame being very tense for both players was nip and tuck throughout with Jack coming through on the colours making it 3-2 to the Semis.

Last QF saw ex professional Andrew Pagett playing come back International Anthony Krysa being out of the game for several seasons. On paper it looked Andrew would be the stronger and should come through OK. Anthony had other ideas, with breaks of 56 and 40 to take the first two frames. Andrew wasn't able to respond and Anthony came out a worthy winner 3-0

Semi-Final 1 found Rhydian Richards up against an on fire Kishan Hirani. Rhydian was unable to stop the relentless attack from Kishan with breaks of 86-68-66. Kishan sealed it 3-0 to reach the Final in some style.

The Jack Bradford/Anthony Krysa match was a long drawn out affair with both players giving a lot of respect to each other. Jack going ahead with a 32 break gave him a 2-1 lead. Anthony came back in the next with a 35 to make it 2-2. Jack went ahead in the last with 31 on the board with 27 remaining. Anthony wanting a snooker and with the white ending up in the green pocket was enough for Jack to head for the final 3-2.

Kishan's stellar form in his semi meant that he had a long wait while Jack and Anthony tussled to the decider. This seemed to dull the momentum for him, however having had 10 tough frames already, Jack was the more tired of the two as the Final unfolded. The first frame was very close that went to a black ball finish in Kishan's favour. After that Kishan saw off the last two frames with a 35 in the last. This wasn't Jack's day and Kishan went out a 3-0 winner, but Jack certainly showed tremendous never-say-die attitude on his way to the Final. 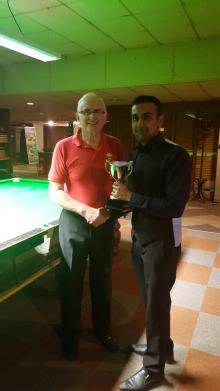