The second U21 event took place at the weekend, with a field of 13 meeting up at Redz.

The first round featured some strong performances from several player. Aaron Burgess was unable to contain Dylan Emery. Aaron was in the middle of a finely crafted 56 break when the pink rebounded off the back of the pocket and stayed on the table. allowing Dylan back in to take the frame.Tyler Rees had the highest break of the day with a 100 in his match with Brandon Phillips.

The quarter-finals kicked off with Jackson Page facing Dylan. Five frames later, Dylan emerged victorious, to line up a semi final against Tyler. Ben Fortey and Ryan Rowlands made their way through to the semis with 3-0 wins against Zac Walters and Lewis Sinclair.

The Final was between Dylan and Ben. Dylan got off to a fast paced start and was soon 2-0 up, before Ben pulled back the third. However, Dylan earned a well deserved win in the 4th, to tie for first in the rankings with Jackson.

Dylan is pictured below, receiving his trophy from John Dobson 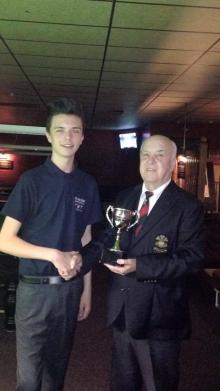