Many of you will be aware that as part of the Home Nations Series, World Snooker have allocated two wildcard entries for the home nation at each tournament.

There were several deserving candidates. The selection was made after considering many factors and discussions with representatives from World Snooker. Therfore, in recognition of their success in the last twelve months and their ongoing potential, the Welsh wildcard entries for the 2017 Welsh Open will be: -

We are sure that you will follow their performance avidly during the tournament. We will of course update the website with their progress. 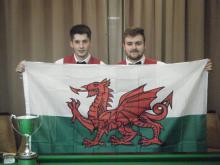 We are fortunate in Wales that the standard of our junior players is as high as it is, with many youngsters making huge strides forward. Success at the Home Internationals last year for Dylan Emery, Callum Matthews, Bradley Ferguson and Alfie Davies as the Welsh Under 16 Team proves that Jackson and Tyler's international success is not isolated and that young talent is flourishing. Add Connor Caniff, Joshua White, Aaron Burgess and Liam Davies into the mix and you have ten players all capable of finishing a frame in a single visit, all playing in the Under 18s class. Naturally though, we'd welcome players of all standards to come along to the competitions, as playing quality opposition is what brings your game forward.