Once again one of our young players has gone abroad to compete in a European or World Championship event and has gone the whole distance. This time Dylan Emery defeated home player Mikhail Terekhov to secure the Under 16s World Championship in St Petersburg, following on from the successes of Tyler Rees and Jackson Page in the last 18 months.

Dylan came out of the blocks in fine form, even knocking up faultlessly and probably scoring a huge psychological advantage in the few minutes before the match started.

The warm up form carried over into the first frame, with Dylan making a timely 42 to take the frame 85-28. His opponent struck back confidently in the second frame 17-70 and it seemed like this match might be extremely closely fought. The early running in frame 3 was made by Mikhail, but Dylan dug deep and pulled back to take the frame 58-55. This third frame appeared pivotal, as Dylan ran in a 48 on his way to taking the 4th frame by 100 points to 15.

The mid session interval can sometimes take the edge off the player in form. Dylan however was in no mood to allow that to happen and he wrapped up the win 73-5 and a worthy 4-1 victory/ 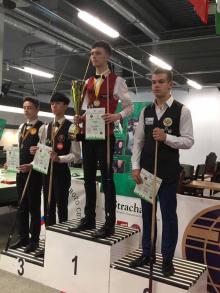