This season's Masters is again showing the sheer strength and depth of the field. Event One saw a debut win for Wayne Morgan and Event Two didn't dissapoint in this regard either.

The top half of the draw pitched Wayne against Darren Morgan in the last 16, Darren prevailing 3-1 to line up a quarter-final match against Rhydian Richards after he'd seen off both Keith and Dean Thomas 3-1. Gavin Lewis and Gerald Brain took the second QF spot with close matches against Matthew Farrant and Jeff Denscombe respectively.

In the lower half, Steven Thomas cruised through to the QFs with 3-0 wins, whilst his next opponent Jason Tucker got off to a rocky start (3-2) before finding some form to take his match with Paul Doughton 3-1. The final QF was comprised of Neil Jones and Tony Chappel, both of whom were taken to deciders along the way.

As Darren and Rhydian played out a typically tight match which Darren took 3-2, Gavin gathered momentum and a 3-1 win over Gerald a just reward to set up a cracking semi final. Gavin's form continued, 3-1 the result and a berth in the final his just reward. Steven narrowly missed out to Jason 3-2 and Tony Chappel found Neil unstoppable in the other QFs, however Neil was unable to keep Jason safe enough, with Jason taking the match 3-1.

And so to the final. After such tight matches throughout the day, you'd have been forgiven for thinking that the player fresh out of hospital may have been the one to run out of steam first. Nobody told Gavin that though and 3-0 was a fair result, giving Gavin his first Welsh ranking title. 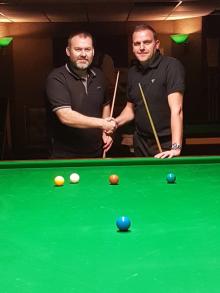