With a wildcard to the Welsh Open a tempting prospect, our finest players young and old converged at Redz in Cwmbran for two days of competition.

With 38 players entered, six preliminary matches took place. With no seedings some high ranked names came out of the hat, Jackson Page, Kishan Hirani and Tyler Rees all in action and making it past the first hurdles in their way.

The second round got underway in some style, with big breaks coming in from several matches. Jackson ran in a 101, Dylan Emery a 124 and Darren Morgan a total clearance of 141 as they saw off the challenge of Josh Sellar, Dale Hughes and Daniel Bridle respectively. The draw could have been kinder to Kishan and Tyler, pitching them against each other for a deciding frame nail biter, taken by Tyler. Andrew Pagett drew North Walian Matt Roberts, a 4-2 win setting up a last 16 tie with Tyler. Jamie Clarke brought his best potting boots with him, not troubled in his opening match with Jay Davies.

In the last 16, Jackson dispatched Darryl James 4-0, Andrew Pagett beat Tyler 4-1, Jamie didn't drop a frame against Lewis Butcher and Jason Tucker beat Sam Thomas 4-2 to fill out the top half of the quarter finals. The bottom half was equally talented, Dylan Emery and Darren Morgan both taking their ties 4-0 and Mike Hodge and John Breeze going the distance in their matches before booking their places.

Day one concluded after the quarter finals. Jackson v Andrew was a flowing match, 4-2 to Jackaon. Jamie booked his semi-final match with Jackson despite a fine 104 from Jason Tucker. Dylan v Darren was a rematch of the Mens Event 5 qualifier the week before, this time it was Darren who took the spoils. Mike Hodge took the last slot, John Breeze unable to contain him.

Sunday morning came and just 4 players remained. Jackson and Jamie traded breaks with Jackson winning 4-1. Darren and Mike were truly locking horns though and 4-3 to Darren was at least some consolation for Mike, he really couldn't have tried harder.

And so to the final. The opening 4 frames were shared between Jackson and Darren, with neither player wanting to let the other get away. In the end though, the matchplay of Darren saw him home and a timely 99 break saw him home, securing the second wildcard nomination and booking his place at the Welsh Open at the end of February. 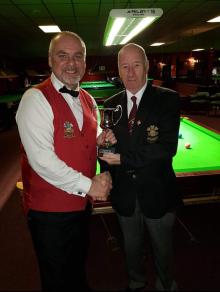