Mens Event Four was played to a conclusion at the weekend, down at the Mark Williams Snooker Club, Tredegar.

The top half of the draw saw two closely fought contests. Jackson Page came from 2 nil down to level his match against Tyler Rees. Tyler missed match winning chances in each of the last 3 frames before finally edging out Jackson to get to the semi final. Alex Taubman also had his work cut out against Dylan Emery with winning chances falling to both players before Alex eventually winning the deciding frame.

With a little confusion over the dates, Jamie Clarke was not in attendance and so Jack Bradford went straight into the semi final. In the same half of the draw Kishan Hirani lost the first frame then won 3 on the trot to overcome Richard King.

The semi finals were contrasting affairs with Kishan quickly going into a two frame lead. Jack clawed one back in typical tenacious style before Kishan made a break of 87 to seal the match. The other semi final was much more closely contested with both players showing some very good match play snooker and despite Tyler making a break of 102 it was Alex who made his way to the final.

Kishan took the first frame of the final on the pink in a finely balanced encounter before Alex took the second frame with a break of 51. The third frame was keenly fought with some exteded safety play  before Kishan edged in front. Frame four was won with an excellent break of 70 by Kishan, giving him his second Mens event win on the bounce, to go with his victory in the European qualifier. 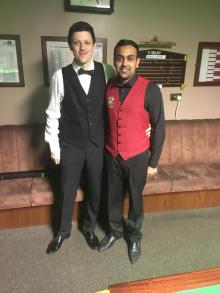