After the first leg giving Red Triangle a substantial lead of 8-4 the concluding leg was taken to The Savoy, Barry.

Savoy, (Home Team) having the selection of players in their hands put first two matches on: -

Both Away players struggled with the tables and Savoy took advantage of this by taking the first 4 frames and making it 8-8.

Match 3, Tom Davie v Scott Davies, Tom took the first frame from Triangle with a brilliant 83 break but Scott came back in the second frame and made it 1-1(9-9).

Match 4, Ryan Rowlands v Wayne Morgan was a tight game throughout to the score was a little predictable at 1-1 ((10-10).

Deciding pairings started together with Mark Bennett(Savoy) v Andrew Pagett on table 1 and Alfie Davis (Savoy) v Dylan Emery on Table 2. Pagett rushed ahead taking the first frame comfortably making it 10-11 to Red Triangle however Benny was struggling with the heat leaving him needing to wipe his cue frequently, disrupting his own rhythm. Dylan Emery on table 2 played some solid Snooker  soon followed up with a first frame win making it 10-12.

With just 1 frame required by last years losing finalists, it was just a matter of whether Pagett or Emery would hold their nerve for a victory.

With time and experience Andrew cleared up to take the deciding and victorious frame, leaving the fiinal score at 10-13.

Well done to all the teams that entered this year, the standard always leads to an xcellent tournament

Commiserations to the Runners Up Savoy 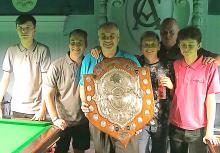