11 players contested this event and it was pre tournament favourites Jackson Page and Dylan Emery who came through to face each other in the final of an under 21s event for the 2nd time this season.

Dylan did not have it all his own way against the up and coming Liam Davies but managed to achieve a 3-1 victory, he then overcame the dangerous Connor Caniff by a 3-0 scoreline which included a break of 60.His semi final against Tyler Rees promised to be a cracker. Tyler cleared the table with a superb 104 break to draw level at 1-1 only for Dylan to take the next, then followed up with a 78 break to book his place in the final.

Jackson Page started impressively with a 3-0 win over Lewys Smith which included a break of 70.
In the quarter final he cruised through against Alfie Davies with breaks of 107 (the highest of the day) and 68. he then reached the final with a 3-0 win over Rhys Morgans.

The final itself was a somewhat subdued affair considering the two fine young players on show. Jackson in particular was below the kind of form we have come to expect from him. However this took nothing away from Dylan who took full advantage for an excellent 3-0 result. 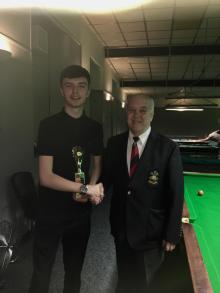