The Under 16s got together again last weekend down at the Mark Williams club, Tredegar.

The top half of the draw saw Liam Davies progress to the final without dropping a frame, with 3-0 wins over Harvey Rees, little brother Ryan Davies and Riley Powell. His eventual opponent in the final, Olly Bridle, was also on some run of form up to the semi finals, where he met Bradley Tyson. The match ended up 3-2 on Olly's favour, but he knew he'd been in a tough match after!

The final was a scintilating affair, with both Liam and Olly trading blows and taking frames in quick succession. In the end Liam came out on top 3-2, maybe due to Olly's tougher semi-final. One thing is for sure though, thefuture of the U16s will never be entirely one sided. 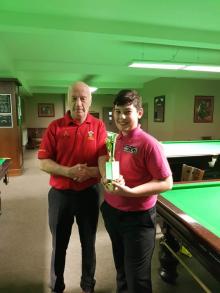 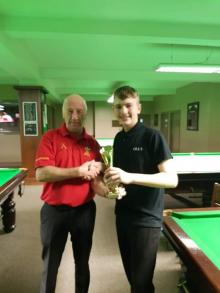