The fourth Under 18s event of the year was played at the Mark WIlliams Snooker Club in Tredegar, with old foes (and friends) Conor Caniff and Dylan Emery meeting in the final.

Conor was involved in the tastiest tie of the first round, facing Liam Davies. The match went the distance and was nip and tuck, with Conor edging it, before despatching Luke James 3-0 to book his slot in the final.

In the bottom half of the draw, Dylan (like Conor) played a prelim match and the ever imporving Bradley Tyson took one frame, but Dylan's next two matches were 3-0 wins over Harry Bond and Ryan Bowgen.

With Conor and Dylan in the final, it was never likely to be played at a pedestrian pace. Conor took the first frame with a 69 break, but Dylan ran out 3 straight frames, aided by breaks of 60, 46 and 78 to take the event win to open up an almost insurmountable margin at the top of the rankings, Conor being placed second after today's results. 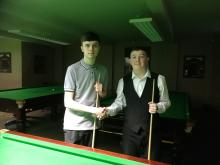