The Under 21s class reached Event 4 at the weekend, with Conor Caniff running out the winner, setting him up nicely for his forthcoming trip to Israel and the EBSA competition.

The top half of the draw was largely dominated by two Under 16s, Rhys Morgans and Liam Davies, who reached the semi final with strong performances, Liam having the days highest break of 71. Rhys however held his nerve and took the semi 3-1. With several players moving up an age class soon, the performance of some of the younger players bodes well for the future.

In the bottom half there were a couple of no shows, which led to Dylan Emery reaching the semi finals without a match. There he faced Conor, who prevailed 3-2.

In the final, the greater match experience of Conor paid dividends and the 3-1 win a fair reflection of the balance of play. 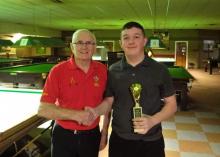