Event 5 had a slightly reduced entry of 22 players on the day. The standard of snooker overall was exremely high with a number of players compiling breaks of 50 and above.

In the top half of the draw, Alun Squire's route to the semi finals was a tough one, with neither Jason Tucker (3-2)nor Chris Rees (3-1) going down without a fight. Alun would face Tony Morgan, who also found his opponents (Don Newcombe 3-2, Byron Philips 3-1 and Wayne Morgan 3-1) tough going. Despite the arduous early rounds, this semi also went to the decider, with Alun taking the win.

The bottom half of the draw saw Gavin Lewis reach the semis with a 3-2 defeat of Alan Hurley and a 3-1 win over Simon Williams. His opponent would be Darren Morgan would be darren Morgan, who despatched Chris Thomas with breaks of 69 and 90, Rhydian Richards with a break of 53 and Darryl James with another 63 break, all matches 3-0.

The Semi Final stages saw Alun Squire win against Tony Morgan 3 frames to 2 and Darren Morgan win 3-0 against Gavin Lewis with a 60 and the days higherst break of 102..

In the Final Darren Morgan continued his relentless potting form to beat Alun Squire by 3 frames to nil, with another 50 break and a clearance of 90. 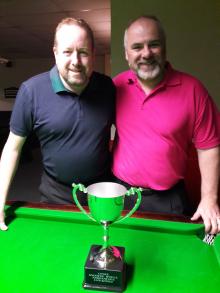