The Championship event was contested by 12 youngsters and it was pre tournament favourites Liam Davies and Oliver Briffitt-Payne who duly reached the final.

Oliver was involved in two close encounters against Bradley Tyson and Jacob Boyle who had his best tournament for some time.

In the other half of the draw Liam Davies came through his semi final with a 3-1 win against Olly Bridle who compiled a nice break of 51 which could have been much more had he not missed a simple black off its spot when in perfect position.

The final was very close for the first two frames, both could have gone either way but it was Liam who managed to win them both for a 2-0 lead. This seemed to deflate Oliver somewhat and he played some loose safety which allowed Liam in for a 37 break quickly followed by an excellent 70 clearance to take the match and the title of Welsh under 16 champion to go with the titles of Welsh under 14s and under 18s which he had won earlier in the season. 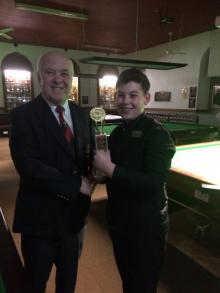