A highly talented field converged at the Kings Club for the opening Under 21s of the new season.

In the top half of the draw, Dylan Emery lined up a tasty semi final against Tyler Rees, seeing off Olly Bridle and Liam Davies both by three frames to nil. Tyler's route was similarly dominant, but Luke James and Bradley Tyson both took a frame each in their 3-1 defeats, no mean feat against Tyler. In the semi, Tyler won the opening frame with a 53 break and was also on to win the second but missed the final brown and Dylan cleared to draw level at 1-1. Dylan got in early in frame 3 and made a 91 break to take a 2-1 lead. Dylan finished off the match 3-1 with an excellent 98 break missing a difficult black down the side rail.

The other half of the draw, Conor Caniff made the most of his bye to book his semi final place with a 3-0 win over Ciaran Paul (himself a 3-1 winner against Ollie Briffet-Payne) Alfie Davies beat Jacob Boyle 3-0 and Rhys Morgans 3-1 before facing Conor. The semi final was a more subdued match with some missed chances on both sides but Conor ran out a 3-0 winner.

As ever, these finals often start with tight safety and this one was no different, with Dylan edging the frame. Frames 2 and 3 were equally edgy, but each one went to Dylan and with it the overall competition win.

Above, we see Dylan being presented with the winners trophy by Gordon Pantall, below Conor with the runners up trophy. 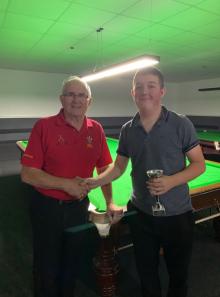