Nine youngsters contested this first under 14s event of the season. It was encouraging to see 4 new entrants including 7 years old Jamie Williams who travelled down from Holyhead to take part. Unfortunately he was drawn against Liam Davies (Wales top junior) Jamie put up a good fight before losing 3-0 and certainly looks to be a promising prospect for the future.

The other new entrants (Harry Armstrong, Reuben Owen and Joseph Pinch) also lost to much more experienced opposition but all of them said they had enjoyed their first taste of match snooker and it was clear that with more match play under their belts they will soon be competing in the latter stages.

Harry Armstrong & Joseph Pinch (both Cardiff) reached the final of the plate competition but it was Harry who managed a very close victory over his pal by 2 frames to 0.

Meanwhile, Ryan Davies (younger brother of Liam) was involved in a tremendous tussle with the very promising Riley Powell in their semi final match. Eventually it was Riley who pulled off a 3-2 win with a superb pot on the final black.

The final itself failed to produce any real fireworks as Liam ground out a comfortable 3-0 victory which confirms he will be the man to beat again this season. 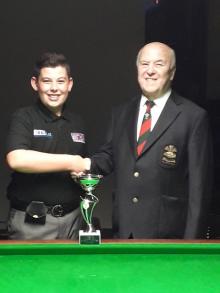 Above we see Liam Davies receiving the winners trophy from John Dobson, below is Harry Armstrong with the plate trophy