Liam Davies was again the star of the U/16 tournament here at King Club in Gorseinon.

Liam once again made it through the day without dropping a single frame. His quarter final opponent was Harry Armstrong, new to the Welsh system this season, who will have taken some positives away from his 3-0 defeat. Liam then lined up against Olliver Briffett-Payne who also went down 3-0 in their semi final, aided by a nice 47 from Liam.

In the Final he was up against newcomer Jamie Reader from Risca, who got to the final with a win against Dainton Barrass 3-1 with a 46 break, before taking a tense deciding frame against the much improved Oliver Philips in their semi final.

In the Final Jamie was unable to recreate his performance in the semi final and Liam took a well deserved 3-0 win. 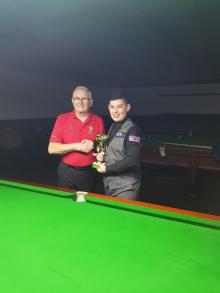