An entry of 32 players on the day but unfortunately 2 players from North Wales were unable to make the trip due to transport issues. The early rounds did not produce any major shocks with most of the form players moving through the rounds. Many breaks in excess of 60 being produced but the standard increased substantially at the Semi Final stage where Rhydian Richards produced the break of the day, an extremely fine 129 total crearance. The Semi Finals were contested by Darren Morgan & Alan Hurley in one and Rhydian Richards & Byron Phillips in the other. Darren Morgan produced solid form in his victory over Alan Hurley and Rhydian with the aid of his high break produced his best form of the day to defeat Byron Phillips. The final could not have been more closely contested with breaks of over 50 in 3 of the frames. Rhydian finally crossing the line winning 3 frames to 2 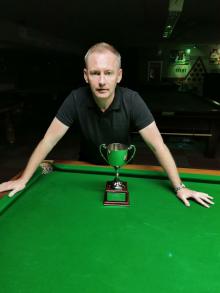