With the Billiards being recently re-introduced, a revised format was played, with some success. The Groups were played out in a 150 Up format

The semi finals were again 150 Up, with Alex Donne beating fellow International Robert Williams and Khurram Khan booking his place in the final with a win over Brian Rees.

The final changed to 200 Up and Khurram did more than make a game of it. With the scores tied at 144 all, Alex broke the tape with an unfinished break of 60 to win his second event of the season. 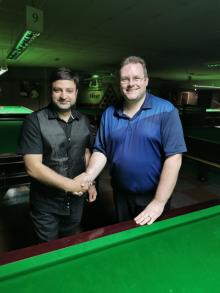