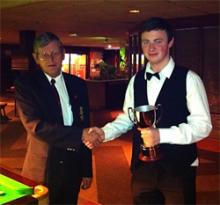 After much success in the junior ranks 18 year old Duane Jones (Mountain Ash) asserted himself on Welsh Men's snooker when he won the first event of the season at the Terry Griffith's Matchroom.

In the final Jones beat the ultra-consistent Rhydian Richards (Merthyr) by three frames to two.

Both semi-finals were hard fought matches with Jones defeating the resurgent Stephen Ellis (Swansea) by three frames to one while Richards overcame another improving junior star Kishan Hirani (Cardiff) by the same margin.

Welsh Internationals Lee Walker (breaks of 67, 40, 40.) and David John (47 and 69) were beaten in the quarter finals along with North Wales qualifiers Gareth Allen and Jack Bradford.