SUPER SENIORS (OVER 55s) EVENT 2
Don Newcombe won the second WBSA Snooker Seniors event of the season beating Keith Thomas
by three frames to one in a hard-fought final. Keith had chances to take a 2-0 but didn't quite get over the line and was on the backfoot after that.

Despite the horrendous weather outside the conditions at Ammanford Snooker World were
excellent as usual.

Former WBSA Chairman Ronnie Allen pulled off the result of the day when he defeated former
Welsh International John Mills by three frames to nil in Round One. He followed that up with a 3 -2
win over David Richards before going down to Newcombe in a decider in the semi-final.
In a very tight second round tussle Newcombe beat former European Team champion Gerald Brain.
Tony Williams made the highest break of the day with 59. 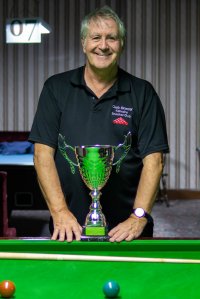