The Juniors descended on Cue Club, Aberaman in their droves at the weekend. With both Under16s and Under21s in play, there were 30 entrants all told.

The Under 16s saw William Gwinnell run very close by Jack Taylor (3-2) before seeing off Logan Rawlings (3-0) to reach his first ranking event final. In the bottom half Riley powel faced Spencer Collings, Rio Chung and Sion Stuart, with only Sion able to take a single frame. In the final, Riley's experience came through for an impressive 3-0 quickfire win. 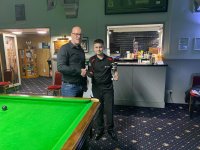 In the U21 event, Liam Davies was taken to the wire by Zac Cosker in their prelim (3-2) before playing Luke James, winning 3-0. His next opponent was Jay Slocombe, who was far from a pushover and again took Liam to a decider. Liam's semi final opponent was old adversary Ollie Briffett-Payne, Liam finishing up a 3-1 winner in a close contest. In the bottom half of the draw, Riley was again in fine forma and despatched Jack Annalls (3-1), Bradley Tyson (3-2) and Sion Stuart on his way to the final with Liam.

The final itself was another fine contest between these two, Liam taking the tie 3-1. 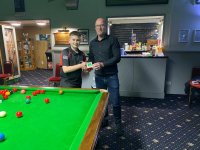 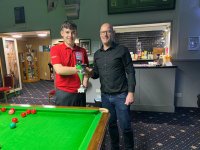