Cue Club Aberaman again played host to the 4th round of the Junior Series, with Under 14s and Under 18s in play.

In the Under 14s, Siôn Stuart made his way to the final with 2-0 wins over William Gwinnell and Joel Williams. In the other half of the draw, Jack Taylor saw off Spencer Collings (2-0) and Jay Vokes (2-1). The final was a close run affair, with Siôn running out a 2-0 winner.

The Under 18s was another strong field this weekend. Oliver Briffett Payne had two 3-0 wins over Spencer Collings and Rio Chung, before having to dig deep to overcome Zac Cosker 3-2 to reach the final. Riley Powell's route was via Aidan Collings (3-0), Logan Rawlings (3-1) and Siôn Stuart (3-0). The final was again tighter than the 3-1 scoreline suggests, with both Riley and Ollie settling in nicely, with Riley edging Ollie out at crucial moments to seal the title. See https://fb.watch/hpyEnLHZs3/ for the video. 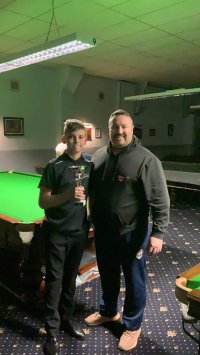 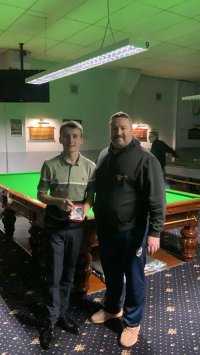 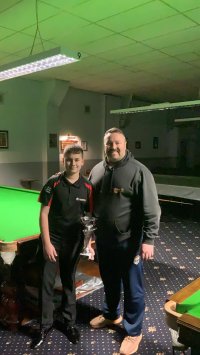