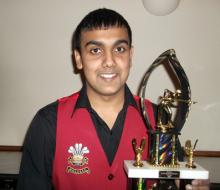 In a close hard fought final Kishan just held off the challenge of Jamie Clarke who finishes the Under 21's series as top ranked player which means he can also look forward to a trip to china. Kishan reached the final after putting out international team mates Duane Jones and Tom Rees. His win over Tom Rees included the days highest break of 106 which ended when he wobbled the easy last red with a possible 141 looking a certainty.

Top six placings at end of under 21s series (4 events)